As adults, many social activities, particularly in our nightlife, include the consumption of alcohol, the great facilitator of our uninhibited social behavior. By and large, social culture of 20-somethings resides in a bar, where alcohol-induced conversation runs rampant, and personality exudes freely. 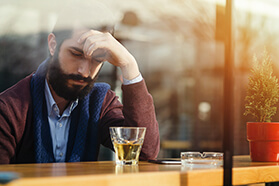 For many, alcohol is a great way to take the edge off, particularly when approaching daunting situations. The bedroom, for example, is a setting from which much anxiety derives, with desperate thoughts of performance infecting a cool composure. It makes sense, then, why alcohol and dating so closely intertwine, when the first nervous utterance upon entrance into the apartment of a love interest is, “would you like a drink?”

Recent research which explores the link between alcohol and erectile dysfunction, however, would have men reconsider their pre-game ritual, with a growing body of research revealing the adverse side effects—both short-term and long-term—of alcohol consumption on male sexual health.

Despite contrary belief, alcohol might have a reverse effect on your in-the-moment sexual prowess. One negative short-term side effect of drinking the performance anxiety nerves away is the possibility of temporary, or situational, erectile dysfunction (the inability to maintain an erection in certain situations). While evidence exists to support the notion that having a drink or two before a date helps reduce anxiety and increase your sexual desires, too much alcohol, Loyola University reports, can depress your sexual response, interfering with your experience. A study from the University of Washington supports these findings, revealing that sober men were able to more quickly achieve an erection than intoxicated men, with some men unable to achieve an erection at all after drinking.

The science behind these effects of alcohol on arousal is pretty simple: Alcohol, as a depressant, decreases blood flow to the penis, which in turn reduces the intensity of your orgasm and can dampen your level of excitement (ironically, alcohol, a popular source for intoxication, becomes the proverbial buzzkill of the bedroom).

In addition to temporary erectile dysfunction, too much alcohol also lowers your inhibitions, opening the door to unplanned sexual encounters and unprotected sex which can heighten your chance of contracting a sexually transmitted disease.

The link between alcohol consumption and erectile dysfunction is recognized in the scientific community. In addition to serving as a bedroom libido-dampener, excessive alcohol consumption can lead to long-term erectile dysfunction. Research revealed that men who are dependent on alcohol are 60 to 70% more likely to suffer from sexual problems, the most common of which is erectile dysfunction. Men who regularly abuse alcohol may also suffer from premature ejaculation and loss of sexual desire (low libido). In fact, the term beer impotence has joined the lexicon of terms that refer to alcohol’s impairment on a man’s sexual conquest.

This long-term, overconsumption of alcohol can actually damage the blood vessels—both in the penis and throughout the rest of the body—leading to troubling conditions like hypertension and heart disease, which are both factors in the development of erectile dysfunction.

The effects of alcohol have been enjoyed for thousands of years and studies show that drinking alcohol in moderation is in fact good for your heart and circulation. But that doesn’t give you the OK to overdo it. According to the Centers for Disease Control and Prevention, moderate drinking for men is no more than one to two drinks per day. Drinking beyond this amount in turn causes the toxins from alcohol to build up in your body and begin affecting your organs, not the least of which includes the regulation of blood flow to the penis.

If you’re worried about your performance ability in the bedroom, taking the edge off with alcohol can have a reverse effect, and attempting to bypass the temporary erectile dysfunction, alcohol may cause may lead to long-term erectile damage. For those men who seek performance-enhancing therapy, or are already suffering from ED—either from excessive alcohol consumption or from other environmental factors—there are natural ways to overcome your symptoms.

GAINSWave® provides a natural solution for both men suffering with erectile dysfunction and men seeking natural male enhancement. GAINSWave® therapy uses acoustic sound waves that are applied to the penis to improve blood flow and encourage new blood vessel growth. It is one of the only non-invasive, drug-free options which provides long-term relief for erectile dysfunction, supporting up to 2 years post-treatment results. If you’re interested in learning more about the GAINSWave® procedure, schedule a consultation with a GAINSWave® provider.